For the past few months I’ve been yoyoing up and down London’s parks trying to get fit for the triathlon.Visitors to these Royal parks might expect them to be dominated by organised beds of plants but off the beaten track they are home to swathes of long grasses dotted with wild flowers. Most green spaces get shaved short like sports pitches so it’s nice to see these grasses gracefully grow old in plain view.

Grassy meadows are fantastic for wildlife – even when they’re old and baked brown by this hot weather. Meadows are home to up to 150 species of flower and grass that provide hideouts for insects which in turn are food for small mammals and birds. Few habitats in Britain can match this level of diversity. Even when dead, grasses provide great dens for invertebrates. They should only be cut in the autumn once these creatures have nested, reared their young and enjoyed the late summer seedheads. Even then, they will always appreciate some rough areas left all winter to provide them with a habitat and home during the cold months of winter.  If you are a little bank vole life is much better if there is rough foliage to hide in. This is particularly important given the loss of 97 per cent of UK wildflower meadows since the Second World War.

Of course this feeds further up the food chain. In St James’s park, woodpeckers, long tailed tits and starlings can be seen making the most of the plentiful summer heat and abundance of insects. Cow parsley and nettles bursting out from the undergrowth around the lake have withstood the curiosity of the ducks and geese. 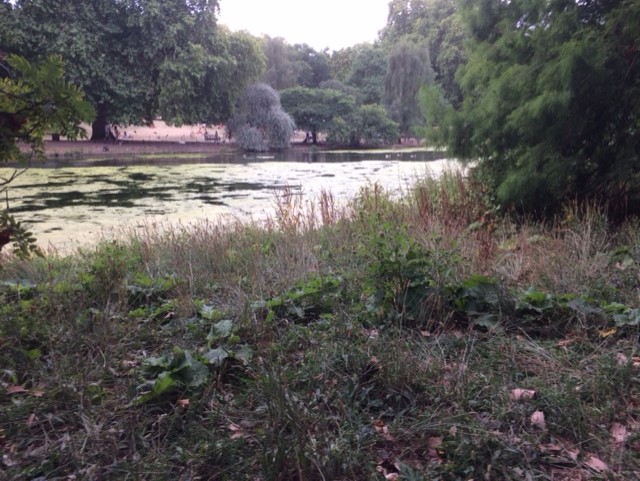 In May, a pair of languorous red kites were spotted wheeling on air currents hundreds of feet above the park. These scavengers used to cause havoc for Elizabethan Londoners as they would nick people’s food, rather like brazen seagulls in British coastal towns. For decades they were nearly extinct until a very successful reintroduction programme in 1989. Perhaps they will start nicking Londoners’ food once again.

Moving away from central London to suburbia there seem to be corridors of wilderness opening up. Driving out of London via Richmond the other day I noticed wilder-looking roundabouts and overgrown pavement sections on the sides of roads. From stretches like Barnes Green to the open spaces of Hackney Marshes, patches of wild grasses are thriving in green centres. These wild spaces are more than just attractive, they bring a lot to us. Research has shown that strolling around green spaces stops people feeling depressed and dwelling on repetitive negative thoughts. More and more the countryside looks to be creeping into the heart of the city and that’s good news for all animals – us included.